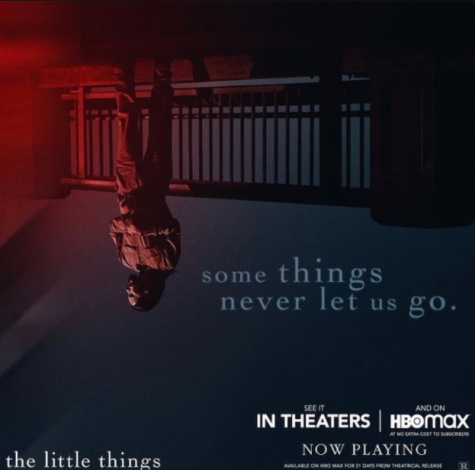 After nearly 30 years, John Lee Hancock released The Little Things, and if truth be told it was a script that should’ve stayed shelved.

My anxious wait for the movie’s release began when I first saw the official trailer as a YouTube ad. The ad instantly intrigued me as it gave a sneak peek at what seemed to be a promising psychological thriller.

The plot of the film seemed like a good one as well; two officers, one haunted with a dark secret from his past, join forces to capture a serial killer terrorizing Los Angeles in the ’90s.

A notable mention that played into my excitement for this film was the well-known actors taking on the lead roles. Oscar-winning actors Denzel Washington, Rami Malek, and Jared Leto automatically made me feel like it was going to be a great movie.

As disappointing as it is for me to say, The Little Things was not the movie I expected it to be. Beware, there will be slight spoilers beyond this point.

The opening scene starts with a young woman driving down a lonely road, blasting music and singing along, very reminiscent of a scene in Jonathan Demme’s The Silence of the Lambs. She then begins to realize she’s being followed and of course, freaks out.

With the opening scene giving us our first taste of suspense, you’d think the mood would continue throughout the film, yet quite the opposite happened.

The majority of the film’s plot felt slow and boring. The pacing of the movie can’t be completely criticized because psychological thrillers tend to be slow-paced to deliver the tension that creates a thriller movie.

Despite this though, there was nothing to offer viewers to compensate for how slow the movie was going. The only thing I was intrigued to discover was the dark secret that haunted Denzel Washington’s character, Joe “Deke” Deacon, so much.

Especially after we realize just how much Deke is haunted by his past after he sees 3 dead women relating to a case he was assigned to that went cold in his creepy hotel room.

As I mentioned, I felt extremely excited to see how Denzel Washington, Rami Malek, and Jared Leto took on each of their roles yet once again the performances were far from satisfying.

With such a great foundation of actors, it was disappointing to see that we were given a subpar performance from such excellent actors that have given outstanding performances in the past.

Seeing such an astonishing act from Malek emulating Freddie Mercury for Bohemian Rhapsody, to Washington in movies like Philadelphia or The Magnificent Seven, and Leto in Dallas Buyers Club it was a great letdown to see their roles in The Little Thing being far from show-stopping.

Comparing some of my favorite performances these actors have done, there is no way I’d rank their performances in The Little Things as a good one.

Yet a bad performance isn’t always the actor’s fault, it may be the script or how the film was executed.  The Little Things had the opportunity to be a great film but it sadly turned out disappointing.

With having nothing to offer viewers to be excited about besides learning who the killer is and Deke’s secret, the movie is quite boring and that’s its main downfall.

Although I believe it had a good plot, it’s similar to other movies in this genre and it has nothing to set it apart from the rest making it bland and basic.

Not even 3 Oscar-winning actors were able to save The Little Things and that’s solely based on how Handcock decided to execute his movie.

The cherry on top of this bad milkshake is the ending. As shocking and as unexpected as the ending was, it wasn’t enough to save the film.

I was hoping for a big revelation or an unexpected turn to happen right before the end. Instead, it left me with questions like ‘Is this it? This is the ending we’re getting?’ from the unfulfilling ending I felt as the audience.

On top of that, it was confusing and we’re left with about a million and ten questions which isn’t always a good thing.

Although The Little Things doesn’t win a spot on my ‘Most Hated Movies’ list, it’s not a movie I’ll be itching to come back to, or ever for that matter.