The Label that Sticks with You… Until it Doesn’t 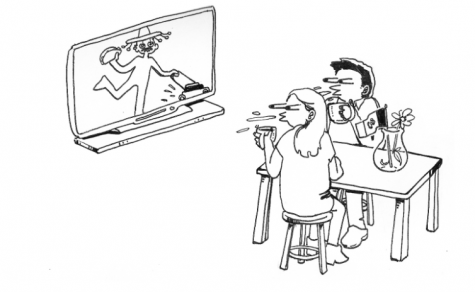 Image gathered from The Tartan

Harmful stereotypes unfairly represent different minority groups in America, however, when hyperboles and misconstrued depictions become overbearing, one part of what you are suddenly doesn’t feel like you at all. Some of the only representation minority groups have are being shown on the news and in a negative light, or on a show with overplayed accents; when this is the case, the immigrant or second-born generation part of them starts to feel like a burden. A burden that’ll quickly get dropped one identity at a time.

Exaggerated portrayals of immigrants in media, like television and news articles, can affect real life. Immigrants are berated for being foreign-born and migrating to the U.S. sometimes, solely based on what people see and hear which makes immigrants seem like a threat. The misrepresentation of immigrants in the media leads to tensions with Americans.

The misrepresentation of immigrants is not new as it starts back in the late 1800s and again in the 1900s when America had large-scale immigration. During these times, millions of immigrants had come from different parts of the world, mainly Europeans and Asians according to The Bill of Rights Institute. The influx of immigrants brought on many conflicting opinions towards immigration amongst Americans; some exploited them, others were suspicious. Taking advantage of this confusion, several political cartoons were published to sway public opinion and gather political points. These cartoons egged on American’s anxiety over having their jobs taken away and capitalized on the stereotypes and many facial features of immigrants. 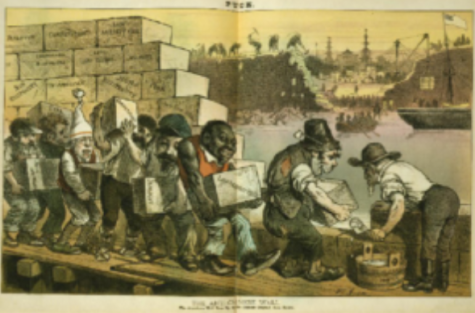 The anti-Chinese wall–The American wall goes up as the Chinese original goes down / F. Grätz. 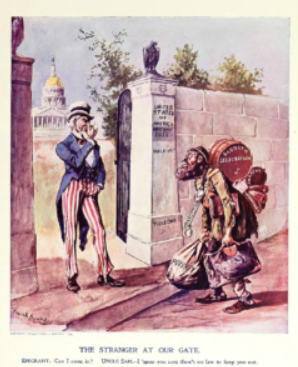 THE STRANGER AT OUR GATE: by Frank Beard

Emigrant: Can I come in?

Uncle Sam: I s’pose you can; there’s no law to keep you out.

Those were some of the first cases negatively portraying immigrants in the media, and the fact of the matter is that it started resentment and suspicion towards immigrants which continue to be perpetuated.

While imagery is a way to misrepresent immigrants and throw subtle accusations, wording and news reports also play a key role in furthering stereotypes.

The public is more likely to gather information from mainstream media and social media platforms. When newspapers and news channels release footage of politicians or articles with unfriendly language, facts get drowned, and opinions surface to the top. The people focus more on the “they say, she say” part instead of doing their own digging and research. So when a term like “illegal” is the most common descriptor for the word “immigrant”, the public notices. From a key finding in The Migration Observatory’s “Migration in the News”, they state that the descriptor, “was used in 10% of mid market stories, 6.6% of tabloid stories and 5% of broadsheet stories” all from 58,000 news stories covering migration. It should also be noted that “terrorist” and “sham” were the top use descriptors when talking about security concerns and the legality of migration. 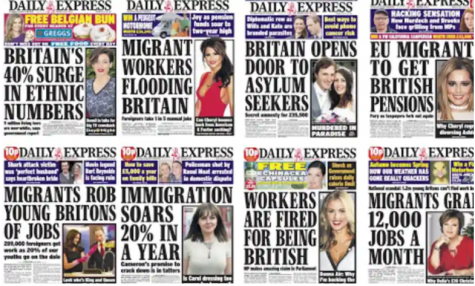 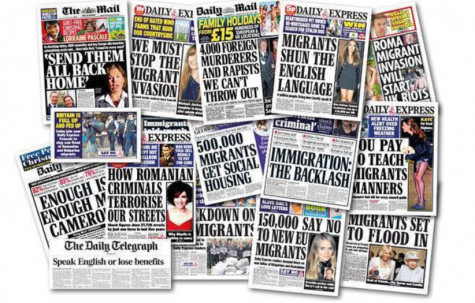 What this does is it leaves a negative connotation towards the word, so when it is used to describe an immigrant, they’re automatically criminalized without having a say in the matter. It is instead implied and the readers do the guessing. In a social experiment, Ted Brader et. al. does an analysis on “What Triggers Public Opposition to Immigration? Anxiety, Group Cues, and Immigration Threat” and states, “When stereotypes are undermined, the emotional impact wanes. When details are simply absent, people “fill in” the missing pieces with negative stereotypes (Gilliam and Iyengar 2000), and the emotional impact remains.”

The experiment had given the respondents mock articles that framed immigrants in a negative light with subtle word changes before asking questions on how it makes respondents feel and their thoughts on immigration. One of Brader’s conclusions states, “Citizens felt more threatened by Latino immigration, not European immigration, and this feeling triggered opposition to immigration and multilingual laws, prompted requests for information, and led people to send anti-immigration messages to Congress.”

As reported by The Washington Post, news outlets love overrepresenting Latino men specifically, this is in spite of their declining presence in the “general immigration population” as stated by Emily Farris. This is because many try to pair Latinos with dangerous or criminal activity, and so when news outlets show these immigrant men time and time again, it builds a seed of distrust in the public that isn’t supposed to be there in the first place. It makes this distrust automatically blind their views on Latinos.

While there are harmful media depictions, lack of representation in minority groups is still a widespread problem. According to the Immigration Nation: Exploring Immigrant Portrayals on Television report, Budiman et. al. addresses the imbalance of media representation on the immigrant majority. While Latinos make up 40 percent of the immigrant characters on a select 47 T.V. shows, Asian immigrants are only a small 16 percent. This is despite having outnumbered the steadily declining Latino immigrants in the U.S. and being 26 percent in reality. And while some T.V. shows addressed immigrant issues and characters, the underrepresentation of foreign-born characters was still prominent. 14 percent of U.S. immigrants are foreign-born but only 11 percent are categorized as immigrants in these T.V. shows.

It isn’t uncommon to see characters on T.V. shows being immigrants or shown as undocumented, however, it is an issue when the numbers are thrown out of wack for a more dramatic story that makes for a less realistic telling of immigrants.

For example, as reported by Immigration Nation, 24 percent of immigrants in the U.S. are unauthorized, yet 41 percent in the mention 47 shows had characters that were undocumented immigrants. Of this number, 63 percent were Latino characters. What this does is make those who haven’t researched or interacted with immigrants start to see a pattern. They see the struggling immigrant character time and time again, and time and time again it is a Mexican immigrant. They connect being a Mexican to being an immigrant, despite the data proving a majority is not.

Not only are Mexicans heavily used in the media, but there are certain favorite tropes that really make one question whether directors love representation and diversity, or if they love what cards they can pull out with them. One is how many Hispanic immigrant characters have an encounter with drugs, police, or do some criminal activity; this being loosely based on “real-life statistics.”

However, Christopher Ingraham from The Washington Post states, “Undocumented immigrants are considerably less likely to commit crime than native-born citizens, with immigrants legally in the United States even less likely to do so.” So when Hollywood continues pulling that card it reinforces the criminal stereotype despite immigrants not being the main contributors to criminalities.

While this is a stereotype that is greatly overused, can it be argued that any representation of immigrants at this point, is good representation? Is something better than nothing?

Short answer: No. Long answer; when it misrepresents a group of people and continues to promote the same, ugly stereotypes that cause discrimination against them, no. It isn’t much better to be completely ignored by the media and yet most of the time there’s some representation, the entire trait and summary of that person are that they’re an immigrant. It’s one-dimensional, there’s no depth, and it doesn’t provide exposure to see that they’re just regular humans. Not just humans with the “baggage” of having a different cultural background.

Representation for immigrants is important, especially when it can affect the audience’s empathy towards them and make them more willing to hear about immigration issues. According to USC Annenberg, “For each of the three shows, viewers who saw the immigration storyline had more inclusive attitudes toward immigrants than those who did not, including greater comfort meeting undocumented people and opposition to criminalizing undocumented immigrants.”

People have more access to the media and entertainment rather than immigrants with real experiences, so it can be noted just how important it is to correctly represent this group of people, even when immigration isn’t the main focus. Just by exposing this group to those who’ve never had access to them in real life, makes the audience’s awareness of them less hostile and more open, especially when portrayed in a different light than “job-stealing” and “criminal”.

It is crucial to start showing directors and people on different platforms how to better represent immigrants. By educating others and sharing experiences as well as how it is firsthand being second or first-generation can we start breaking barriers in the media.