Intersectionality: Care About It 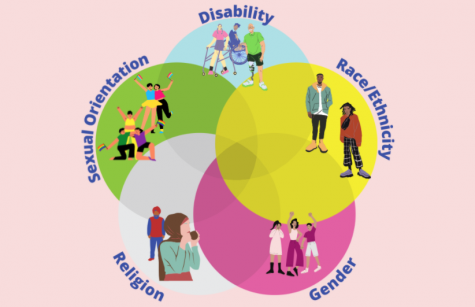 Intersectionality affects more than one group of people in multiple ways. People in these groups share intersecting experiences with those in other groups, which is where the term “intersectionality” comes from. It constantly affects how people are treated every day. (Graphic by Cierra Pringle)

Earlier this semester, DVC students had discussions about intersectionality in their grade-level Connections classes. Conversations regarding students’ identities arose in those discussions.

Many people have markers or terms they use to identify themselves and others like them. These identity markers create categories of people that share similar characteristics and experiences. The way individuals present themselves will affect how they are perceived and treated. Those who fall into multiple categories will be treated differently from those who fall into just one or two categories, which is where the conversation on intersectionality began.

Intersectionality is “the interconnection nature of social categorizations such as race, class, and gender, regarded as creating overlapping and interdependent systems of discrimination or disadvantage; a theoretical approach based on such a premise” (Oxford Dictionary).

The term intersectionality was first coined in 1989 by Professor Kimberlé Crenshaw as a way to describe how individual traits and attributes overlap or “intersect.” It takes into account the prejudices people face with overlapping and intersecting identities and the complexity of it all.

Intersectionality asserts that people face disadvantages from numerous sources of oppression and that identity markers don’t stand alone. Not everyone who faces discrimination only faces one kind. People face discrimination based on categories such as race, gender, sexuality, disability, religion, physical appearance, class, and many more.

Why does it matter?

Understanding intersectionality is not only important, it allows different perspectives to be seen and heard. That’s especially important in different movements across the world.

Ignoring intersectionality potentially creates even more inequalities and inequities. Recognizing the intersection of different forms of oppression and injustice will help movements and organizations to reach their goals of social justice and equity.

What needs to be done? (YW Boston Blog)

Avoiding narrowing down someone’s identity to just one marker or characteristic is especially important since one thing isn’t all a person is. People’s identities are complex and broad which is important to acknowledge in the face of oppression and discrimination. This helps to recognize the several experiences and challenges others face due to their identities and prevents assumptions from being made about them and what they go through.

“Boundaries are really being pushed about what is acceptable and what’s not acceptable,” Becht said. “And I think people are seeing that just because somebody does one thing doesn’t mean that’s all they are.”

Another thing one could do is to seek as many perspectives as possible. When putting oneself into another’s shoes, it’s easier to acknowledge what they go through and how that relates to their markers and characteristics. This could also open the door to more change starting to happen in different social justice movements and local communities by beginning to examine the space(s) different people inhabit.

It’s especially crucial to continue to be educated about the various issues people are facing on a daily basis and what is being done to put an end to what is causing those issues to occur as well as the topics surrounding them. Listening to those who face issues expands the perspectives one is exposed to and allows them to have a better understanding of their identity and others’ identities.