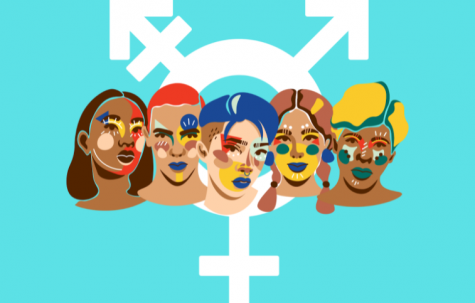 Gender is more than a perception of someone’s physical appearance. Gender expression comes in several forms which is important to note to prevent assuming, stereotyping, and misgendering. (Graphic by  Cierra Pringle)

Many youth today are more open to exploring a big defining factor of their identities: gender. As the understanding of gender continues to evolve and shift, so does the gender identity of many people across the world.

Gender has many dimensions and is now measured across a spectrum, but it hasn’t always been that way. Traditionally, humans associated gender with a person’s assigned sex at birth, which is why people used the words “gender” and “sex” interchangeably. In some cases, a person’s gender can be related to their assigned sex, but it’s also connected to their identity, body, interests, and personal awareness (Gender Spectrum).

Chadwick School senior Newt is non-binary and has had struggles with self-identity and how people perceive them in the way they want to express themselves. They’ve experienced lots of dysphoria when it comes to their gender since not everyone is completely understanding.

“I feel like people probably, and they do, just see me as a guy or whatever,” Newt said. “I feel like if I were to, you know, express my own gender in a different way, like outside of that box, I feel like there could be some lash back.”

People do tend to associate appearance with gender and other identity markers. Assuming someone’s gender based on how they look may end up doing more harm than good.

Exploring the idea of gender isn’t just about personal awareness, but the awareness and understanding of others. The people individuals are close to play a big role in making sure people who don’t identify with the gender associated with their assigned sex are seen and feel comfortable with their gender expression. Newt experienced someone who outed them after coming out as non-binary.

“Outed is basically is when people that hide their identity, for their own safety generally, in the community, and they kinda put their trust in someone and tell them about their identity and that person like tells the general public without their consent,” Newt explained. “That can be really scary. That was really scary for me…I was mainly very angry and confused.”

Newt knows that people who come out as trans don’t necessarily expect the people they trust to spread information about them to people they want to keep it hidden from. This shows that one’s environment plays a big role in social gender acceptance.

North High senior Elias, a transgender, gay man, was able to explore his identity more with just a simple change of environment. His move from Atlanta to Los Angeles has allowed him to embark on a new journey to self-discovery.

“Moving, in general, helped me like look at myself in a different way because I was able to entertain the idea that I could be something different without the fear of being judged by people who were my friends,” Elias said.

Entire communities can have an impact on one’s ability to feel comfortable enough to express their gender without fear of judgment. However, families, friends, and loved ones are usually the first people individuals feel comfortable sharing their identities with.

“I’ve seen from a lot of people they’ve had trouble coming out in general because of what their parents or family might think,” Elias noted.

People are constantly shifting their ideas and morals about self-identity. It has been clear that people have been becoming more educated on what gender is as a whole. Education on this matter has allowed more room for many to find different ways to identify and express their gender.

“Educate yourself about people’s identity,” Newt said. “You probably have a friend who’s genderqueer, gender nonconforming. Another one is to listen to trans experiences in terms of hearing their voices and also uplifting them…Visibility is important.”