Let Them Read What They Want! 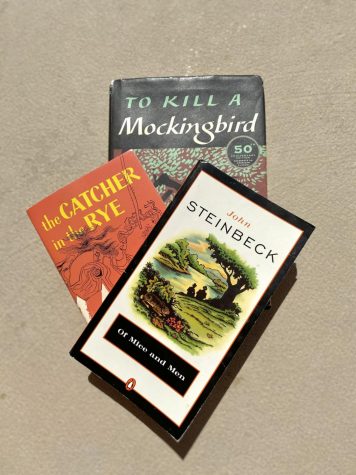 Books stacked on one another. Xochitl Marin/ Vitruvian Post.

One is given the right to freedom of speech, expression, and to believe in whatever one may choose to believe in amongst other rights. A violation of those rights is sure to cause an uprising fueled by anger. Is it justifiable? Completely. If people are given these rights of freedom, they shouldn’t be violated by allowing books from being banned in schools.

Oftentimes books are banned from being taught or even read in school due to profane language, violent or sensitive topics, and certain themes and ideas that have been deemed too inappropriate in an educational environment.

According to Insider, classics books such as Of Mice and Men, The Catcher in the Rye, and To Kill a Mockingbird have been amongst many others that have been banned due to the fact that aspects were thought to be vulgar because of the use of profanity, lewd because of the details the author decided to implement, and sensitive due to dealing with topics such as racism.

Taking into account that not all books are suitable for all ages, it’s understandable that adults try to establish a barrier that prevents children from reading books that revolve around more mature topics like sex and darker issues like drug use.

Trying to prevent a child from reading a book or two that an adult such as a parent believes a child shouldn’t be reading doesn’t erase the exposure the child will get. Margaret Renkl compares banning books to being “as useless as trying to ban air” in her article Harry Potter and Poorly-Read Exorcists that was featured on The New York Times.

Just because a handful of parents make complaints about what is being taught to their child shouldn’t affect the children that got the “A-OK” at home.

Of Mice and Men, The Catcher in the Rye, and To Kill a Mockingbird don’t only share the unjust fate of being challenged and banned, they also hold important themes and morals many readers can learn from and admire.

One can learn the lengths true friendship goes from George and Lennie. With Holden Caulfield, one realizing being a kid doesn’t last forever. Alongside Scout and Jem, one will see that the world isn’t as innocent as one believes.

Some adults will believe a book shouldn’t be taught because the characters drop an F-bomb, experience explicitly mature moments, or become introduced to ideas like racism.

Whether a book contains profanity or explicit content, that shouldn’t outweigh the true meaning, ideas, or morals the author intended to teach or expose the reader to.

Books are created to be read and teach readers morals and aspects of life that may be inevitable to ignore, not to be banned.