The Metro offers accessible services for those who are physically disabled.

Terry Williams, a Los Angeles resident, helped build one of the Metro lines years ago. After getting hit by a car, he now uses the Metro every day.

“It’s easy to use,” Williams said, after getting on the train at the 7th Street/Metro Center, adding that it’s easy to get around Los Angeles by using the Metro.

Williams is one of many boardings on the Metro from people who use wheelchairs each month.

Metro’s transportation systems are particularly diverse when it comes to ridership. Metro trains and buses have accommodations for people with accessibility needs like those with a physical handicap.

Steve Hymon, Metro’s Communications and Public Relations Editor stated, “There are about 100,000 boardings from people who use wheelchairs each month on buses that Metro operates.”

.Riders with a physical handicap generally have simple access to Metro with the use of elevators at train stations and ramps for buses. Space by the exit of train stops is generally open for wheelchairs so that people who use them can have an easy transition in and out of each transit system, without having to get through an extensive amount of traffic.

Metro stations can get pretty jam-packed with high amounts of people who ride the trains. Chad Yeng, a local Metro rail rider, rides the train two to three times a week. He stated, “Large groups of people can make it harder to get on.” When the train is at full capacity, people can always find room somewhere on the train or bus to stand and wait for an open seat at the next stop.

Large groups of people can affect the ridership and accessibility of disabled riders. Occasionally, the capacity of people on the train is very large so there are rails and bars for people to hold onto.

In addition to riders in wheelchairs, Metro also tries to make its trains and buses accessible for blind and deaf riders. Metro is required by the government to be accessible to the deaf and blind community since they are a federally required ADA paratransit service provider for the Los Angeles County. Service animals such as dogs can assist blind people to perform functions they can’t for themselves. Metro says that even though service dogs are allowed, they do need to be in carriers, which certain people can’t carry around.

Additionally, Washington D.C’s Metropolitan Area Transit (WMATA) and Columbia Lighthouse for the Blind (CLB) has created beacons on smartphones to receive key information on locations around the Metro stations such as train platforms and escalators. The system simply estimates the number of steps a person has to take to reach a certain location.

The use of this system in Los Angeles can ultimately enhance the experience for blind riders because it helps guide them through each station. With a system similar to this in place, chances of an accident are small.

Despite the services provided, the Metro can be a dangerous form of transportation for those who are physically disabled in some way. Bianca Ramirez, a journalist for the Southern California Public Radio, reported an incident of a blind man falling onto train tracks in the Metro Los Angeles red line. He wasn’t injured but was stuck under the train and had to wait for the fire department to rescue him.

Isaak Mourning, 17, a current junior at Da Vinci Communications High School and local Metro rider suggested that “They should have people at all stations to help assist people that can’t get around on their own since it should be accessible to all people.”

Metro is financially accessible to most riders. According to Metro’s website, 46 percent of bus riders have a household income of $15,000 or less, and 28 percent of train users earn $15,000 or less. The price for a single trip on either train or bus is $1.75. Students K-12 can purchase fares for $1,  and seniors, disabled and those with Medicare assistance can purchase fares for 75 cents. These options help make Metro financially accessible.

Metro’s use of graphic maps and bilingual signs make it easier for riders to understand where they are and where they need to go. The signs on the train and bus contain the top two languages in Los Angeles, English, and Spanish which causes concern for other universal languages. Ron Bass, a local rider, claimed: “Not every station is going to have languages such as Japanese and Arabic.”

Check out the quick data on Metro ridership below: 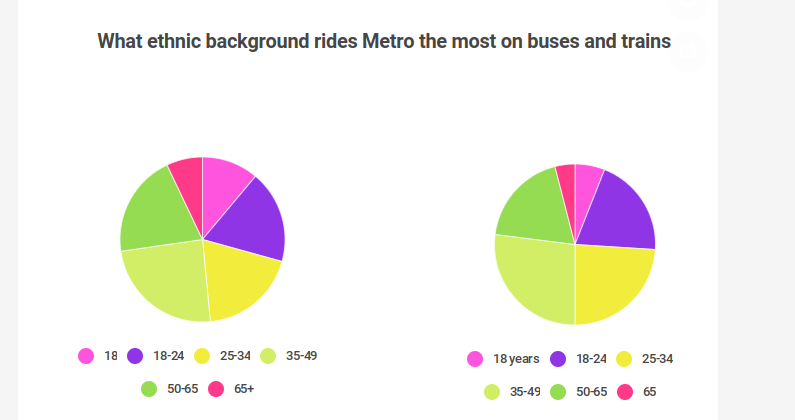